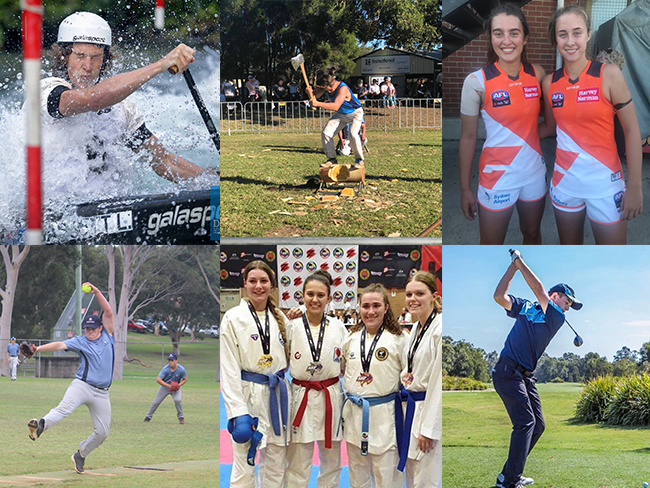 May has been a big one here at the Academy and with so many athletes achieving their goals we just couldn’t let it pass without sharing.

Our Heartland Motors Lone Star athletes are always making us proud. Ash Hill, our Karate champion, competed at the Australian Open Karate Championships where she placed 2nd in both the Junior Female +59kg Kumite event and the Junior Female Kumite Open event.

Meanwhile, Cameron Bailey our woodchopper was at the 2019 Hawkesbury show and placed 2nd in the Junior Boys Chop, missing out on 1st place by only one hit! What a fantastic event to watch.

Three of our AFL Girls, Brenna Tarrant, Emily Hurley & Georgia Garnett were selected into the U18 Rams Youth Girls’ team and attended the Northern Academy Series and Training Camp in Coffs Harbour, where they came home as undefeated champions! Brenna Tarrant and Georgia Garnett were also selected to play with the Giants VFLW Squad. Their first game took place in Melbourne on the weekend of the 18 and 19 May and they came home with a win of 43 – 15 against Richmond.

Sophie Wilson & Lachlan Bassett, canoe slalom athletes, travelled to New Zealand to compete in the NZ Canoe Slalom Nationals. Both athletes competed to a high standard and achieved fantastic results. Sophie came home with Gold for the Women’s C1 event and Lachlan with Silver in the Men’s C1 event.

Not only are our athletes excelling, but AFL Girls’ Head Coach Aisha Firmer has been selected to attend the AFL Sydney High-Performance Coaching program. She was one of only 10 coaches to be invited into the program!

Last but not least, Academy Director Lorraine Landon OAM who has an incredible passion and dedication for sport, in particular basketball, was inducted into the Australian Basketball Hall of Fame on May 10. Lorraine, who is also General Manager of Operations for the Sydney Kings, was previously inducted into the Sport Australia Hall of Fame back in December 2011.

A huge congratulations to all for the major accomplishments made this month!