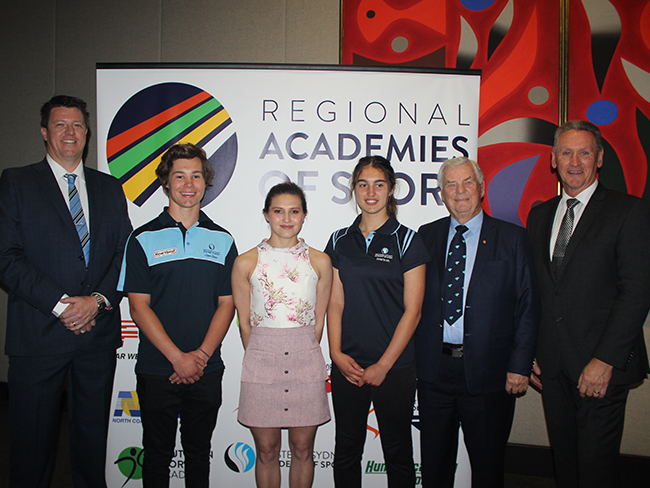 Sporting stars Cameron Bailey and Brenna Tarrant had the chance to meet some of the State’s top politicians while attending a special event at Parliament House to celebrate the role of regional Academies developing some of the State’s most talented young athletes.

The reception was hosted by the Speaker of the House The Hon. Jonathan O’Dea MP, and was also addressed by The Hon. Geoff Lee, the acting Minister for Sport. Many other local MP’s attended during the reception.

Heartland Motors Lone Star athlete Cameron Bailey and AFL Girls athlete Brenna Tarrant were given the honour of representing the Western Sydney Academy of Sport’s 240 athletes at the event.

Prior to the reception, Cameron and Brenna also attended a leadership seminar supported by Your Local Club which featured women’s NRL star and media personality Ruan Sims. The seminar explored a range of topics which will assist them progress to the elite levels.

In addition, the event also included an inspirational speech by three-time Olympian Melissa Wu regarding her sporting journey.

Cameron is a local Hawkesbury wood chopper, and he received recognition for his hard work and impressive competition results. He achieved 3rd place in the Junior Development final at the 2019 Sydney Royal Easter Show up against national and international competitors, 3rd place in the novice standing block at the Royal Melbourne Show and was selected as one of two NSW Juniors to represent NSW U18’s at the Royal Adelaide Show.

Brenna is a local Blue Mountains athlete, and she received recognition for her hard work and impressive competition results. She was the only NSW athlete selected in the 2019 U18 All Australian Team, has been a U18 NSW State player since 2015 and was invited to the 2019 AFLW Draft Combine.