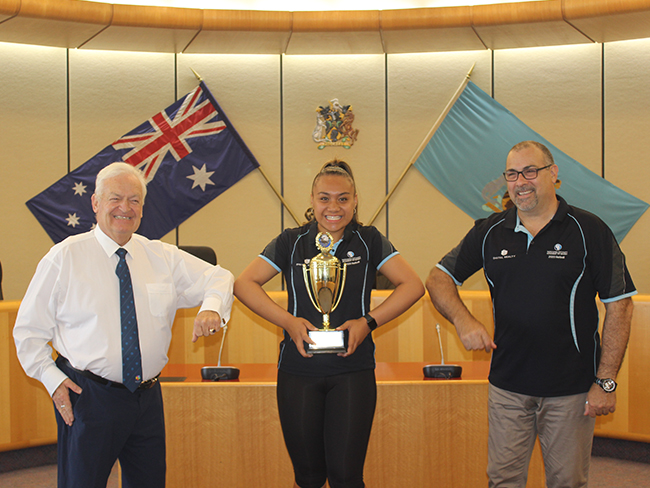 Blacktown City Council and the Western Sydney Academy of Sport have recognised a young local Netball athlete as the Academy’s Digital Realty Netball Athlete of the Year.

Ana Kailahi is a talented sportsperson who attends Westfields Sports High and has been an avid netball player since the age of six. Ana has benefitted from three years involvement in the Academy’s benchmark netball program, and in 2020 was successful in obtaining a contract with the Eastwood Ryde Netball Association Hawks U23 Premier League Team as one of the youngest players in the League.

Ana was also a member of the Netball NSW 2020 U17 Development squad and is a Tonga International squad member in the postponed 2021 Netball World Youth Cup.

Blacktown City Mayor Tony Bleasdale, OAM presented Ana with her award at Council Chambers on Friday 23rd October, congratulating her on her achievements.

“Ana is a testimony to hard work, dedication and to the support of her family and the Academy.

“Council is pleased to assist Ana and the many fine sportspeople, clubs and associations in Blacktown City.”

CEO of the Western Sydney Academy of Sport Martin Bullock commented “Blacktown Council is a wonderful supporter of sport and in particular local athletes, and their support of our Academy programs is greatly appreciated”.