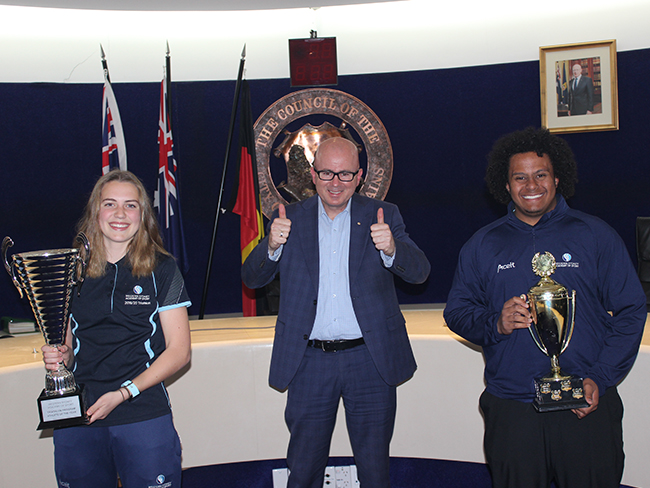 Chazz Ritchie, from Wentworth Falls, has been named the Academy’s Golf Athlete of the Year for his consistent and unmatched commitment to golf. During the 2019-20 season, the St Columba’s Catholic College Year 12 student proved to be the most improved golfer in the WSAS Program, lowering his handicap from 5.3 to 1.8.

Another young athlete, Lili Roth, from Blackheath, is the Academy’s Triathlon Athlete of the Year. The Year 8 Katoomba High Student was recognised for her dedication, resulting in outstanding improvement, as well as for her strong work ethic, and for being a good role model and mentor to other athletes in the program.

Mayor Mark Greenhill presented the pair with their awards prior to a Council Meeting on 29 September, given the annual Academy awards night could not be held due to COVID-19 restrictions.

Mayor Greenhill said: “I’m proud of these two young Blue Mountains athletes who, through commitment, hard work and a positive attitude, have excelled in their chosen sports.

“We are committed to our partnership with the Western Sydney Academy of Sport which provides opportunities for young athletes from the Blue Mountains to realise their dreams, by developing their skills with the help of professional coaches.

“I encourage these two athletes to continue with their outstanding efforts and I hope other young people will be inspired to follow their lead.”

The Academy will be announcing the recipients of the 2020 Athletes of the Year awards for AFL Senior Girls, Cycling and Digital Realty Netball over the next few weeks!