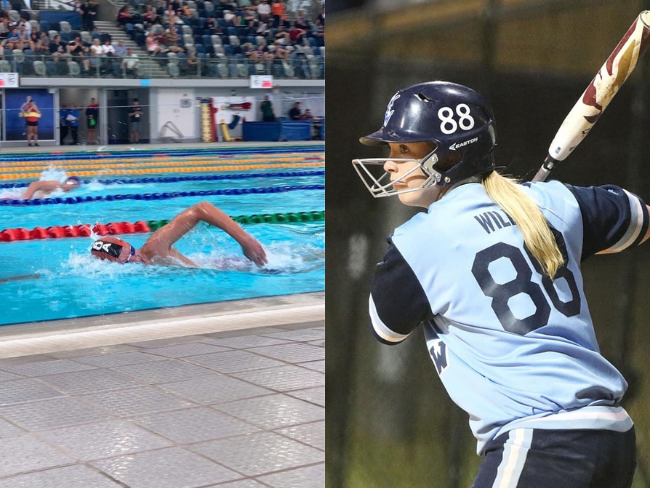 The Western Sydney Academy of Sport has partnered with Western Sydney University and provided two students the opportunity to intern at the Academy during their university semester.

Caitlin Wilde and Aaron Wartmann are both studying a Bachelor of Business Majoring in Sports Management and are in their second year. Through this opportunity, both students wish to create an understanding of what the world of sports business is really like.

Caitlin’s sport of choice is softball, which she has been playing for 15 years. Between 2018 and 2019 Caitlin was an athlete in the Academy’s softball program. Caitlin said she thoroughly enjoyed her time at the Academy as an athlete and her favourite memory was competing at Newcastle at the Academy Games. She also enjoyed training and travelling as a team to compete.

Caitlin dreams of one day playing for Australia and representing the country at the Olympics. Her greatest sporting memory was winning the NSW national titles back-to-back and being awarded player of the finals.

Caitlin hopes to be able to gain an insight into the business aspect of how Western Sydney Academy of Sport operates  from day to day, along with improving her knowledge of sporting organisations and the world of sport in general. Caitlin’s advice for athletes who are participating within the Academy’s programs is to work hard. In her experience the hard work has paid off and has given her an understanding of what it is like to compete a high level.

Aaron is a swimmer who has competed at a National and State level for the past 8 years. He swims at Auburn Swimming Club out of Ruth Everuss Aquatic Centre. Some of Aaron’s sporting highlights including making his first national competition at the age of 14, placing 2nd at the 2020 Victorian Open Championships in the 1500m event and placing within the top ten at the numerous Australian Open Water Championships. Aaron also raced for Western Sydney University at the Sydney Open 2021 Competition.

Although swimming is an individual sport, Aaron believes being part of a strong team is the key to success and some of his favourite memories are from when he is competing with his squad mates.

As Aaron interns at the Academy, he hopes to gain an understanding into what the world of sports business entails. He also wishes to create quality relationships with professionals within the industry to boost his professional business life. Aaron’s advice for younger athletes is to start good habits early such as eating healthy before competition week and stretching regularly to reduce risk of injury.

Over the next few months, these talented individuals will undertake 120 hours of work with the Academy which will go towards helping them complete their bachelor’s degree at Western Sydney University.