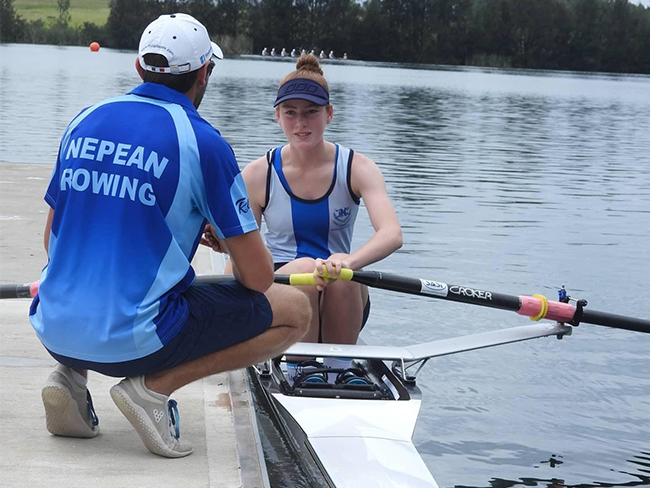 Olivia is a successful athlete across many sports disciplines. She is currently competing for the Penrith District Netball Association, Indoor Netball NSW 14s team and The Nepean Rowing Club. Olivia is also a member of the Glenbrook Little Athletics Club, competing at state level and the Blue Mountains Grammar School Netball squad.

Netball started for Olivia at the Blue Mountains Association as a 7-year-old with a successful and enjoyable introduction to team sport.  As an 11-year-old, she joined the Penrith District Association and was in the team that won the Netball NSW State Age (12 yrs.) Division 1 Championship in 2018 – the first Penrith victory in 20 years.

At her school, Blue Mountains Grammar, in 2019 Olivia was awarded the Junior Sports Person of the Year.

Olivia commented, “I feel honoured and privileged to have been part of two WSAS programs – Rowing and Netball.  I find it very rewarding participating and competing in both sports.  I’ve been told that eventually you have to make a choice, but I want to keep up with both for as long as possible.  My ultimate sporting career goal is to replicate the achievements of world-class multi-sport athletes such as Ellyse Perry and Gretel Tippet.”

Olivia recently faced the challenge of surgery to repair a damaged eardrum, which interrupted her preparation for the NSW Rowing Championships, despite this she still achieved a personal best in the Women’s U16 Single Skull (1000m) posting a top 10 time just missing out on qualifying for the final.