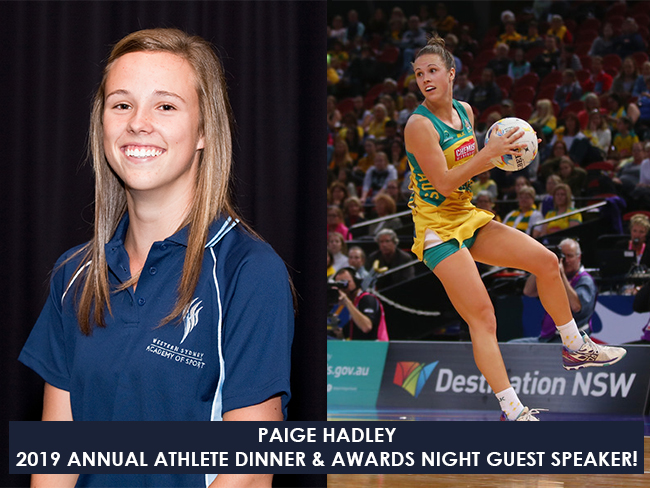 From the Western Sydney Academy of Sport to the Australian Diamonds squad, Paige Hadley is an inspiration to us all.

We are excited that the Academy Alumni will be joining us at the 2019 Annual Athlete Dinner & Awards Night as our special guest speaker!

Paige has had an inspiring Netball career. She was selected into her first Diamonds squad against Malawi in 2013. The following year while playing for the NSW Swifts Paige suffered an ACL injury and was told her netball career was over.

Paige made a comeback the following year saying she “fought hard to come back stronger than ever”.

This year, Paige is playing as vice-captain for the NSW Swifts who are currently sitting in first place. She has also just finished playing with the Australian Diamonds coming in 2nd place after losing by 1 point against the New Zealand Silver Ferns.

Paige will be joining us for a fantastic night recognising western Sydney’s talented young athletes on Saturday 21 September 2019. Don’t miss out on hearing her story. Click here to secure your tickets for the big night now!