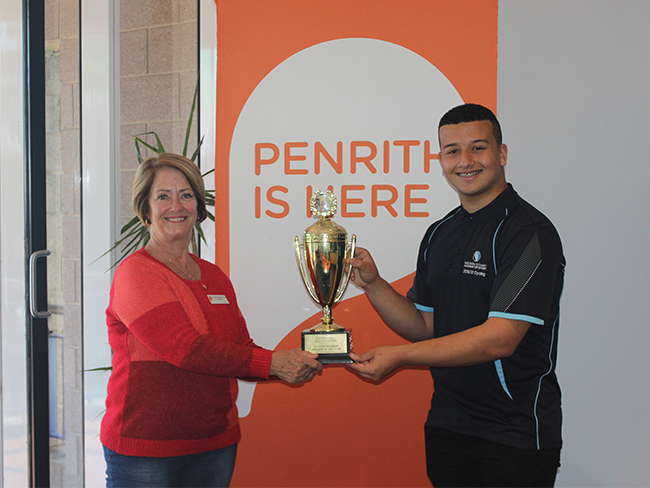 Daniel has been racing BMX for ten years, track cycling for three years and joined the Western Sydney Academy of Sport Cycling program in 2018. After success competing as a BMX athlete, Daniel now focuses primarily on track cycling and in 2020 he placed 3rd in both Sprint and Kerin at the NSW State Championships, both of which were personal bests.

As a result of his achievements, Daniel was selected in the 2020 NSW Cycling State team to compete at the National Championships taking place in December 2020.

Western Sydney Academy of Sport CEO Martin Bullock commented “Daniel has shown his exceptional talent and commitment during his involvement in our pre-elite program and deserves strong recognition for his achievements. We very much appreciate Penrith City Council’s support of our wonderful young athletes.”

Penrith City Mayor Cr. Karen McKeown OAM presented Daniel with his award saying “I’d like to congratulate Daniel on his success in BMX and track cycling events. Well done on juggling your school responsibilities and your riding, especially during what has been a difficult year. We wish you all the very best for the future in the sport. I’d also like to thank Martin and the Western Sydney Academy of Sport for their dedication to athletes from across our region. The Academy’s development programs and partnerships make sports more accessible and help young people in our City achieve their dreams.”