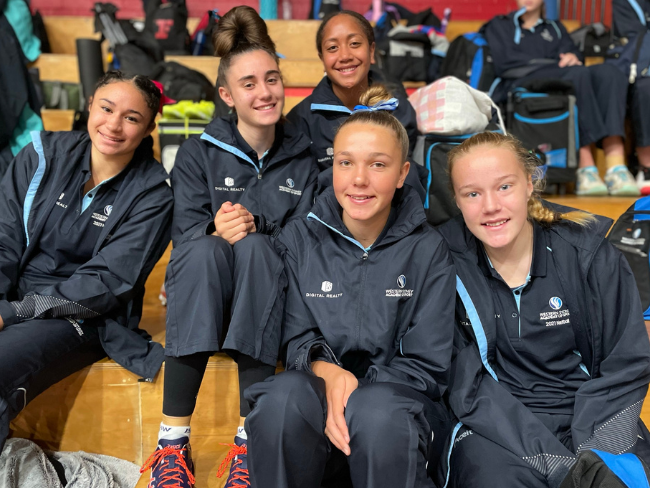 Last weekend the Western Sydney Academy of Sport saw over 50 athletes and coaches from 3 sport disciplines including golf, netball and triathlon compete at the Your Local Club Academy Games.

The Games were held in the Hunter Region and hosted by the Hunter Academy of Sport for the 3rd and final year before moving to Wagga Wagga in 2022. The games showcased over 1,200 athletes from the 11 Regional Academies of Sport over two days of competitions.

The Academy saw six of its talented young golfers compete at the Academy Games. Playing at two tricky courses, Horizons Resort at Salamander Bay and Charlestown Golf Club and up against some tough competition the boys worked hard and never gave up. The WSAS-2 team, made up of Coby Carruthers, Harry Daniels and Blake Hodges came first in the team event and up against 50 other golfers, the whole squad came home with fantastic individual results. Special mention goes to Vidur Subramaniam who came in second place in the Overall Gross Boys and Harry Daniels who came in second place in the Overall Nett Boys.

WSAS has always showcased strong netball teams at the Academy Games and this year was no different. With 25 players and 3 Umpires attending the Games, the Academy made two teams – Division 1 and Division 2. On both days the girls displayed excellent skill, coordination and teamwork. A special congratulations to Isabella Degei from division 1 and Olivia Harris from division 2 who were both awarded Most Valuable Player at the conclusion of the Games and to Umpires Jacinta Tui who was awarded her National B Badge and Chelsea Sutton who was awarded her National C Badge.

The triathlon tournament took place at Cams Wharf with 15 Academy athletes in attendance. This was a fantastic weekend of racing with each athlete working hard and displaying incredible talent and stamina. Saturday was when all of the individual races took place and all of our athletes came home with great scores – special congratulations to Hannah Roots who came second in the Female Youth race, Ella-Kate Hussein who came third in the Female Junior race and Casper Larkin who came second in the Male Junior race. Sunday saw our athletes compete in the Mixed Relay races where Hannah roots was a member of the Property Development Insights NSW Youth team that placed first in the RASI Youth Mixed Team Relay Championships and Ella-Kate Hussein, Jackson Connell, Leila Dickson and Kyle Farrier who were in the WSAS Blue team that placed third in the RASI Junior Mixed Team Relay Championships. Triathlon Australia also took advantage of the event as a chance to run their Triathlon Australia Mixed Team Relay Youth National Championships where Hannah Roots came in second place with her team –  Property Development Insights NSW Youth.